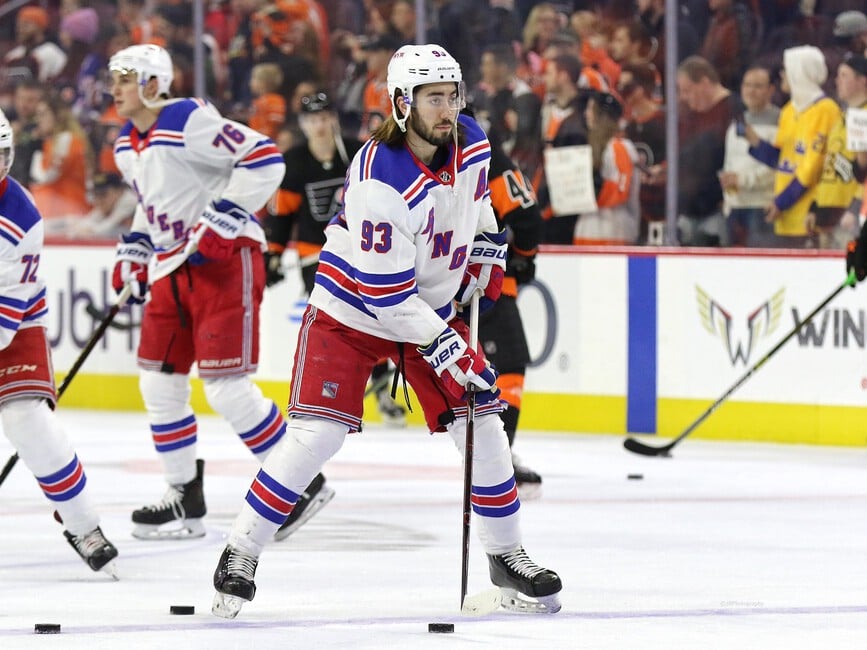 So it looks like the New York Rangers have a No. 1 line. Not a default top forward unit that just happens to be better than their other ones; a legitimate, star-driven trio that should evoke envy around much of the NHL.

When was the last time the Blueshirts could say that?

Not in 2013-14, when the franchise made its stunning run to the Stanley Cup Final; not the following season when they captured the Presidents’ Trophy for the first time since 1993-94. Those clubs boasted impressive depth through the forward ranks, but even taking into account Rick Nash’s 42-goal effort in 2014-15, the Rangers couldn’t claim to have an elite No. 1 forward line that compared favorably to other such units throughout the league.

In Artemi Panarin, Mika Zibanejad and Pavel Buchnevich, the Rangers appear to have put together a dominant combination that could prove next to impossible to shut down on a nightly basis. The group that totaled 79 goals and 120 assists last season were assembled by coach David Quinn even before the preseason started – and so far, has done nothing to dispel the coach’s instinct that he’s got what could prove to be a special trio.

Panarin, the prized free-agent import, scored three goals during the preseason, and his easy meshing with Zibanejad and Buchnevich has been just as Quinn drew it up. The similarity in the games of Panarin and Buchnevich with their playmaking mentality, complemented by Zibenajad, who’s more of a finisher than a traditional passing center, speaks to the potential for a big season for three 20-something players coming off a strong 2018-19.

Given the makeup of this Rangers team, the development seems to be as much of a relief as a reason for excitement. It remains to be seen whether this line can pull the club to greater heights (playoff contention), ends up providing adequate cover for the rest of the youthful lineup, or a little of both. Whatever the ultimate result, the Rangers plan to rely very heavily on this No. 1 forward unit that could have as much to do with the Blueshirts’ fate this season as any other facet of the club.

Panarin is among the top 10 offensive players in the league, while Zibanejad’s breakout 30-goal, 44-assist effort in 2018-19 speaks to a star-in-waiting. Buchnevich’s strong finish last season bodes well for a continued trend upward. Many of their young teammates, however, represent mostly potential, however great, at this point in time.

Whether or not the kids prove quick studies on their way to establishing themselves as legitimate NHLers, they hit bumps in their development that seem to affect most young players or somewhere in between, Quinn needs his top line to score and score and score.

The possibility exists that the coach won’t be able to keep the unit intact. Should the line prove to not be quite as effective once the real games start, or the young Rangers beyond the top forward unit prove utterly unable to deliver consistent offense, he may have no choice but to create a painful separation. It’s worth remembering how fans salivated over the Ryan McDonagh-Kevin Shattenkirk No. 1 defense pairing that was created for 2017-18 – a combination that proved disastrous from the start and led to then-coach Alain Vigneault breaking it up just four periods into the season.

Being able to keep the trio together is the ideal situation, as it opens up more possibilities for the Rangers. A fast-rising group of baby Blueshirts could challenge for a playoff spot by supplementing an elite No. 1 forward unit with precocious production. A youthful group that largely struggles can at least benefit from less pressure as it goes through the growing pains behind that powerful top line. All of that is of course dependent on whether Panarin, Zibanejad and Buchnevich produce at the level at which they’re capable.

“They had a good night, for sure,” Quinn said after the Rangers’ 3-1 victory over the New York Islanders on Tuesday in which Panarin scored twice. “Obviously (Panarin’s first) goal was a highlight-reel goal. They were buzzing pretty good.”

Leadership will of course be expected from the big three on the top line as well. Panarin should in theory provide a perfect example on how to play and prepare in the NHL – for fellow Europeans Kakko and Kravtsov in particular. Zibanejad is seen as the most likely candidate to be the next captain of the Rangers, while Buchnevich could also assume more of a lead role after going through the growing pains in his first three seasons that some of his younger teammates are sure to experience in 2019-20.

The right wing, who began to emerge from those ups and downs in the second half of last season thanks to Quinn’s tough-love approach, is the closest of his linemates to such trials and tribulations, giving him the chance to impart his earned wisdom to Kakko, Kravtsov and others.

The Rangers have Henrik Lundqvist at the back and Panarin, Zibanejad and Buchnevich up front, with key veterans such as Chris Kreider and Marc Staal sprinkled in. They’ll be tasked with leading the on-ice development of their talented but raw teammates in between. One would think Quinn has to be pretty happy with that situation going into 2019-20.