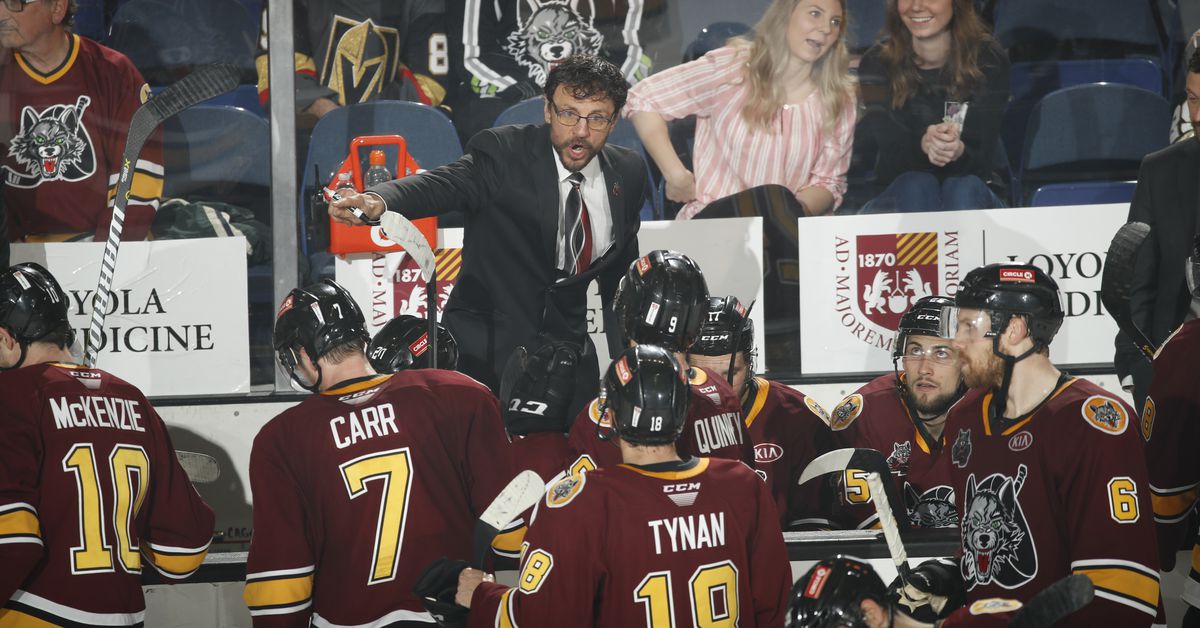 Wolves coach Rocky Thompson tells his players if they concern themselves with the present, future opportunities will come their way. They can’t focus their energy on the NHL, just the present and getting better if and when they get called to the next level.

That also holds for Thompson himself.

“I approach it the same. I practice what I preach,” Thompson said. “I don’t look ahead. I look forward to the now, and what I can do right now to (perform) the responsibilities that I have. One day, if something else happens and an NHL opportunity comes up and I’m fortunate enough to be blessed with that opportunity, I’ll be ready to take advantage of it.”

If Thompson enjoys another successful season with the Wolves, that opportunity could come soon.

In 2017, Thompson led the Ontario Hockey League’s Windsor Spitfires to a Memorial Cup title, just before coming to Chicago. Over his first two years with the Wolves, Thompson’s won a pair of division championships and took them to the 2019 Calder Cup Finals to further burnish his resume.

Further helping Thompson’s case is what his predecessor behind the Wolves bench accomplished in June.

Like Thompson during his playing days, Craig Berube was an enforcer. He accrued 3,149 penalty minutes in the NHL and, similar to Thompson, made his name with his physicality and fists. But in a brief stint coaching the Flyers and now in St. Louis, Berube’s shown he’s got more than brawn.

“I had the conversation with Rocky about, one of the best things that happened to him was that St. Louis won it with Craig Berube,” Wolves general manager Wendell Young said. “(It showed) that a player that was predominantly a fighter and a tough guy in the league can coach a team to a Stanley Cup championship.

“The intellectual side of it, you get to talk to Rocky about hockey and you could be here for days. He’s really a student and a teacher at the same time.”

Wolves players have noticed. They see his intensity and preparation, and how he applies that intellect to his job.

“It’s awesome,” forward Gage Quinney said. “He makes the game easier for you because he thinks it a different way other coaches don’t think it.”

Over his two seasons with the Wolves, Thompson has proven that as he’s navigated different challenges.

In 2017-18, the Wolves got off to a slow start and had to rally just to reach the playoffs, not to mention winning the division. Last season, the Wolves lost top scorer Brandon Pirri to Vegas, saw standout defenseman Erik Brannstrom dealt to Ottawa in a deal to help the Golden Knights, and spent big chunks of the season without eventual league MVP Daniel Carr, who was hurt.

For his part, Thompson is still looking to learn from mistakes, situations he encounters, and the people around him. He definitely doesn’t view himself as a finished product, and is excited to face new obstacles.

“Where it goes from here, I’m just excited,” Thompson said. “I don’t look too far ahead.”