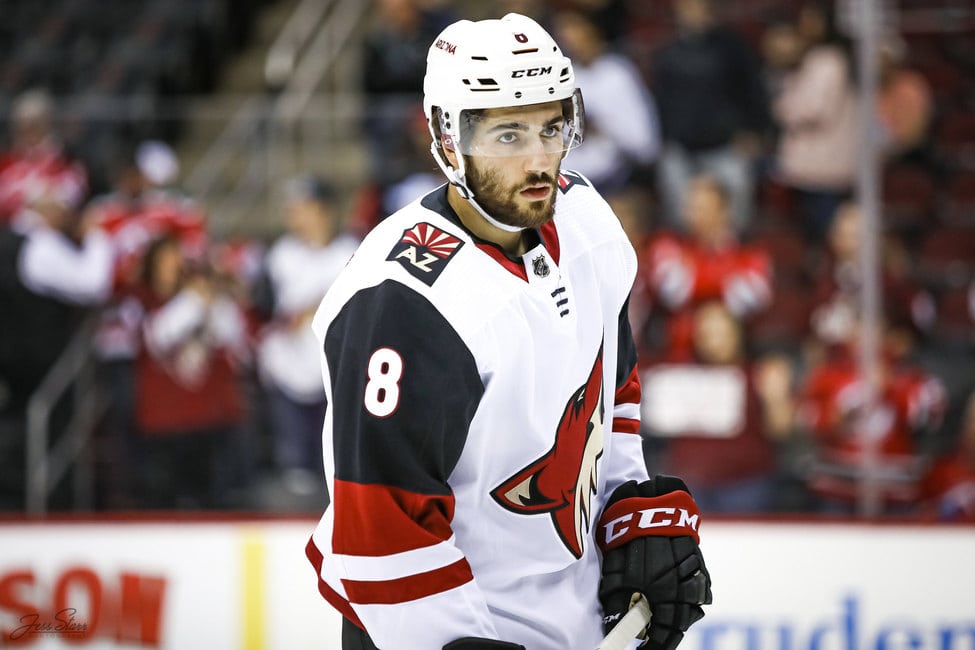 Arizona Coyotes general manager John Chayka’s new contract extension is not without controversy. Three-plus years into the gig and the Coyotes have yet to make the playoffs.

That in and of itself shouldn’t necessarily
raise any red flags. After all, Chayka took on a rebuilding team that had
missed the playoffs for four straight seasons before he got hired. It’s a
process, one that’s admittedly included its share of misses.

Here are Chayka’s greatest hits though,
which have led the Coyotes to at least contend for a playoff spot. No small
feat, but, as a whole, have they merited an extension? You be the judge:

5. Schmaltz for Strome and Perlini

When Chayka acquired center Nick Schmaltz
from the Chicago Blackhawks, he was getting a known commodity. Drafted at No.
20 overall in 2014, Schmaltz was coming off a 52-point campaign the previous
season as a 22-year-old. He was already making good on his potential. Not the
case with the pieces going the other way.

Both Dylan Strome (2015) and Perlini (2014) were first-round picks in their own right. However, in practice, Perlini’s ceiling never seemed higher than that of a middle-six forward. Meanwhile, Strome couldn’t gain any traction with the Coyotes. He obviously broke out in a big way with 51 points in 58 games with the Blackhawks, but there were no guarantees he would do the same with the Coyotes. In Schmaltz, they got someone who has, with 29 points in 36 games since the deal.

It’s worth mentioning Chayka didn’t draft
either Strome or Perlini. So, they can’t reasonably be considered his failures
or players he even wanted to help round out his
team. He clearly got his man in Schmaltz.

Place an asterisk beside this one if you must. However, Chayka’s reasoning was relatively sound, when he dealt a 2016 second-round pick for an offensive-minded defenseman in Tony DeAngelo, who, just two years prior, had gone in the first round to the Tampa Bay Lightning. Since that point, DeAngelo has gone on to post a 30-point season and 14 points in 16 games so far this one, albeit for the New York Rangers.

That’s where the asterisk comes in, as
Chayka opted to trade both him and an early first-round pick to the Rangers for
goalie Antti Raanta and center Derek Stepan. For obvious reasons, that deal didn’t make this list. It
wasn’t a horrible trade based on the Coyotes’ needs at the time, but it’s also
one that may not age very well beyond this point.

3. A Bunch of Futures for Hanzal

No conversation about things that haven’t aged well can be complete without a Martin Hanzal mention, all due respect to him. Since signing as a free agent with the Dallas Stars, the Czech center has played a grand total of 45 games over the last two seasons. Furthermore, Hanzal isn’t expected to play in 2019-20 at all.

At the time of the initial trade in
question, the now-32-year-old Hanzal was seen as one of the biggest names on
the rental market. He’s a defensive-minded forward who at his peak could fetch
you 40 points a season. Chayka milked the Minnesota Wild for all Hanzal’s
reputation was worth, trading Hanzal, fourth-line-forward Ryan White and a
fourth-round selection for a package that included several picks, including the
2017 first-round one that would become Pierre-Olivier Joseph.

The highly touted Joseph would eventually become instrumental in acquiring Phil Kessel. It’s a trade the Coyotes may have lost to the Pittsburgh Penguins, but it’s also a deal Chayka arguably had to make to give his team some top-line punch and credibility up front. It may not have made the list, but this one did for good reason.

Marian Hossa is obviously the biggest name
in this deal, but he wasn’t the key to it for Chayka. Hossa, who hadn’t played
for an entire season at the time of the trade and is effectively retired at
this point, was a salary dump by the Blackhawks. In exchange for taking on his
contract, Chayka acquired two serviceable and underrated players in center Vinnie
Hinostroza (39 points last season) and defenseman Jordan Oesterle (20 points).

The Pavel Datsyuk deal, which was made under similar circumstances, tends to get all the headlines. However, taking on the Datsyuk contract simply allowed Chayka to move up a few spots in the 2016 draft. Following that same model, but improving on it, Chayka ended up getting more bang for his cap space just a few seasons later.

1. Kuemper for Rieder and Wedgewood

Karma has a way of tying up loose ends, it
would seem. A few seasons after his predecessor, Don Maloney, traded
rehabilitated-goalie-in-the-making Devan Dubnyk for 50 cents on the dollar to
the Wild (for a third-round pick), Chayka got a steal of his own. He acquired eventual-starter
Kuemper from the Los Angeles Kings for depth-forward Tobias Rieder and
minor-league-goalie Scott Wedgewood.

Of course Kuemper had been a career backup, including behind Dubnyk with the Wild coincidentally enough. He’s since seemingly wrested the No. 1 job away from Raanta. When Raanta was limited to just 12 games in 2018-19, Kuemper stepped up in a big way, going 27-20-8 with a 2.33 goals-against average and .925 save percentage, almost willing the Coyotes into a playoff spot last season. Kuemper’s been even better this season with a 1.99 GAA and .931 save percentage through 13 appearances.

Whereas the Coyotes just missed out on the postseason last season, the feeling is Chayka’s got them en route to making them this one. It’s likely in large part why he was given the extension. Even if it’s too early to celebrate in that regard, it’s clearly the right time to recognize Chayka for getting the Coyotes to this point, even if it’s a long-term extension. In other words, there’s still a lot more work to be done.