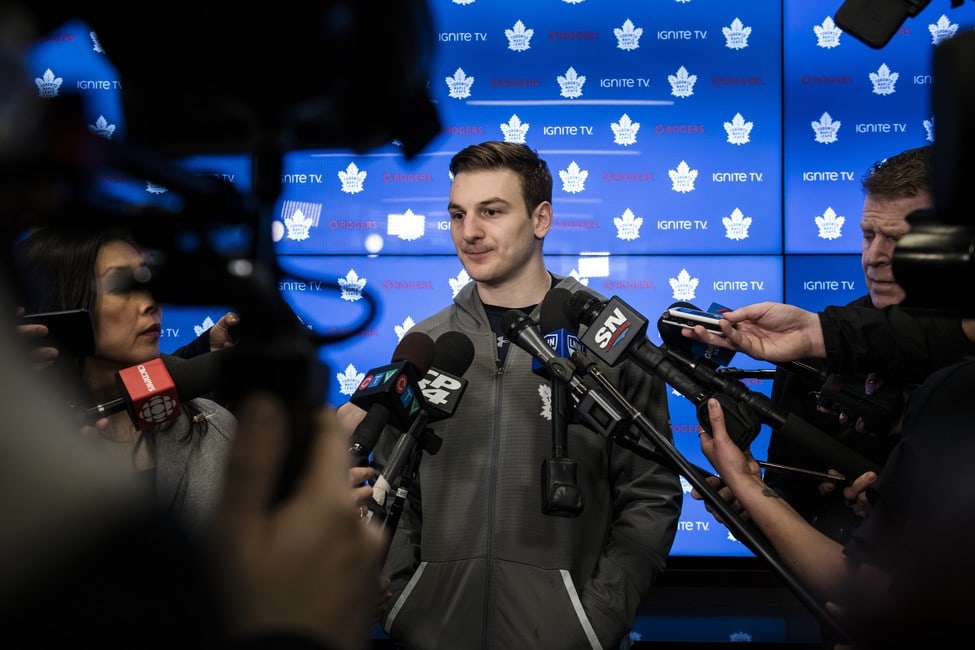 Many Toronto Maple Leafs’ fans, although the Stanley Cup playoffs continue in the background, are preparing for what promises to be a busy and interesting offseason for their team. Obviously, there are players to sign within the COVID-19 impacted context that includes a continuing flat salary cap.

That flat cap is not general manager Kyle Dubas’ fault, but it is his reality. There’s no doubt his pre-COVID signings assumed a salary cap that moved upwards; and, although no one could have predicted a pandemic, Dubas’ will literally pay for it now (as will all other NHL general managers).

Interesting for this Maple Leafs’ team, within this context, a number of roster stalwarts must be wished well and allowed to leave. And, that’s tough both financially and personally. As Auston Matthews noted in his postseason media interview when speaking about his teammates “everybody loves everybody” inside his team (he added in the original quote).

There’s no reason not to believe Matthews about the deep feelings Maple Leafs’ teammates have for each other. The team has been tight all season. They are to a lesser extent hockey’s version of “Easy Company” (part of the 2nd Battalion, 506th Parachute Infantry Regiment) during World War II – a band of brothers. As Matthews said, they love each other.

And, during this offseason, some of them will be leaving. That’s tough.

Zach Hyman Is One of Those Players Who Could Leave

One of the key free agents fans in Toronto will be watching closely is Hyman. He spoke with the media on Wednesday and admitted: “I haven’t looked too far ahead. No one foresaw our season ending so abruptly. I’ve been digesting what’s happened over the last two weeks.”

Hyman did say he would like to remain with the Leafs if “something makes sense;” however, it’s not entirely clear what he meant and it’s difficult to read between his lines.

However, since yesterday, a rumor has been tweeted around that Hyman was offered a long-term contract with the Maple Leafs for $5 million per season but turned it down. Almost immediately Hyman’s agent Todd Reynolds spoke directly to the media to report that the rumor was “not accurate.”

I’m guessing that Reynolds jumped because he didn’t want to be seen as negotiating through the media – a practice that, after agent Darren Ferris’ posturing during Mitch Marner’s protracted negotiations before the 2019-20 season, I have to think Dubas would abhor.

[As an aside, if I were in Dubas’ job, after that situation I would have “leaked the news” to agents that such practices might one day come back to haunt them. Negotiate hard, but not through the Toronto media. The fan’s won’t forget. As a specific example, this week as I read the fan’s reactions to Marner’s postseason lack of score sheet production, it would turned out better for Marner if those negotiations had been behind closed doors. Among many fans, Marner’s reputation is that he’s greedy. That’s become a current mess the organization will have to at least actively mediate before next season.]

The Genesis of the Hyman Rumor

The Hyman rumor apparently was fueled by a Jason Gregor comment on the DailyFaceoff Podcast. On the show, Sportsnet’s Chris Johnston said he believed the 28-year-old Hyman would be getting a huge free agent offer that might even jump into the $6 million range. That, Johnston noted, is a number the Maple Leafs would find it tough to meet.

Obviously, it could happen that Hyman could be offered $6 million and sign with another team. Still, as I noted in a post written on April 24 titled “Maple Leafs’ Zach Hyman Is Not Driven by Money,” I believe such speculation is based on the faulty assumption that all hockey players are driven to sign contracts because of the numbers on those contracts. I also believe Hyman is not one those NHL players who will pick the best bang for the buck regardless of what team is paying it.

Sure, such signings often happen; however, as the modus operandi (MO) for all NHL hockey players, it simply isn’t true. And, I don’t buy it for a second that all NHL players are wired that way. That’s especially inaccurate for Hyman, who was awarded the Big Ten Distinguished Scholar Award twice, selected as a Big Ten All-Academic selection twice, and carried a grade point average (GPA) of 3.7 at the University of Michigan. He’s well aware that there’s life for him beyond playing NHL hockey.

Three Reasons Hyman Will Stay in Toronto with the Maple Leafs

Reason One: Hyman’s Connection with His Community

I have three reasons to be confident that Hyman will resign with the Maple Leafs. First, my own connections – not particularly hockey insiders per se but more Toronto insiders – believe Hyman will re-sign with the Maple Leafs because he’s such a huge part of the Toronto community. He has deep family and religious connections there, and he’s perceived as a strong role model within the Jewish community. In short, he’s a mensch.

My second reason is my research of the children’s books Hyman’s written to see what motivates his decisions. As many Maple Leafs’ fans know, Hyman authored three children’s books. The central themes of those books include (a) loyalty, (b) legacy, and (c) following one’s dreams. In short, he’s unapologetic that a person should seek greatness, leave a memorable legacy, and be courageous enough to follow dreams.

In all this Hyman isn’t self-focused. There’s a Jewish teaching that asks, “If I am only for myself, who will be for me?” In addition, the specific Jewish concept of Dibbuk chaverim literally means “sticking to your friends.” It would be hard for Hyman to leave his teammates.

A third reason is that I can’t imagine Maple Leafs’ general manager Dubas underpaying a core member of his team. And, unless there’s something we don’t know, Hyman is a core member of this franchise – both from a roster perspective and from a community perspective.

During his postseason meeting with the media, Dubas was asked specifically whether it was a priority to bring Hyman back. He said, “I don’t think we need to get into what Zach Hyman means to the club. He has been an excellent player since he arrived here in 2015 and equally as impressive of a person if not more. He comes in every day, puts it all on the line for the team, and we feel very fortunate to have him. He is someone we will certainly work to bring back.”

Dubas noted that Brandon Pridham and Todd Reynolds would work at that to see if “they can get it across the line.” Dubas did say, “It is a big opportunity for Zach and a big decision for us as well. We will get to work on that here.”

As an aside, Dubas has an interesting “way.” Even during the difficult contract negotiations with Marner, Dubas noted that Marner was well within his rights to negotiate hard for his contract.

Hyman must be on Dubas’ mind because, later in that media interview, he added “There is no bones about the fact that we would be very interested in having him back. It has to work out fairly for both sides. Zach is going to want to be treated fairly. We are going to have to figure out something that works in the short or long term.”

Depends Upon Where Hyman Is Coming From

One of us is wrong. It could be me; and, I could be very wrong. Hyman might shock me and sign with another team. Or hockey insiders might be barking up the wrong tree about what motivates Hyman’s decision-making. And upon that focal question – is it the money or is it a synthesis of other key values, I disagree with what seems to be the common foundation of speculation.

As my readers know and tell me (thank you by the way, I hope they know I appreciate your insights), I can be wrong. However, about what motivates Hyman’s decision, I’m more confident than usual. That still doesn’t mean I’m right.

If I’m wrong, you have my permission to remind me I missed it. But, if I’m right, there will be no “I told you so.” Instead, I’ll just be happy that a Toronto-born mensch and a great Maple Leafs’ hockey player has chosen to stay home with his family, his community, and his teammates.

The Old Prof (Jim Parsons, Sr.) taught for more than 40 years in the Faculty of Education at the University of Alberta. He’s a Canadian boy, who has two degrees from the University of Kentucky and a doctorate from the University of Texas. He is now retired on Vancouver Island, where he lives with his family. His hobbies include playing with his hockey cards and simply being a sports fan – hockey, the Toronto Raptors, and CFL football (thinks Ricky Ray personifies how a professional athlete should act).

If you wonder why he doesn’t use his real name, it’s because his son – who’s also Jim Parsons – wrote for The Hockey Writers first and asked Jim Sr. to use another name so readers wouldn’t confuse their work.

Because Jim Sr. had worked in China, he adopted the Mandarin word for teacher (老師). The first character lǎo (老) means “old,” and the second character shī (師) means “teacher.” The literal translation of lǎoshī is “old teacher.” That became his pen name. Today, other than writing for The Hockey Writers, he teaches graduate students research design at several Canadian universities.

He looks forward to sharing his insights about the Toronto Maple Leafs and about how sports engages life more fully. His Twitter address is https://twitter.com/TheOldProf